DESCRIPTION OF THE OUTDOOR THEATER BOWL

Embedded in the fluvial gravels of the ancient Santa Fe watershed plain, the amphitheater with its seating, performance areas, control room, canyon and hill of excavate spoils fits inside a 500′ x 400′ rectangle centered at latitude 35.40’20l.61N and Longitude 105.58′.93’W.

under construction – may be modified at any time

The amphitheater is built almost entirely of reinforced concrete. It’s orientation about 5 degrees east of north allows a view beyond performances to the Sangre de Cristo Mountains. Bench seating for about 2000 wraps around a semi-circular stage. Five aisles descend from a ground level promenade down through the seating to the stage inside the bowl. There is virtually no separation between the front row and the stage. 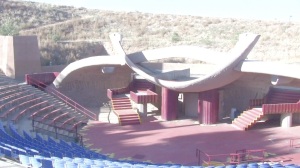 From under the two aisles flanking the center vomitoria (passages from which players may emerge) open to the stage. The eastmost vomitorium adjoins a cylindrical concrete pit. Rolland Meinholtz, IAIA drama instructor prescribed that the theater provide multiple performance areas. Backing the main stage, a shell with a scooping horned balcony, the upper stage, and panoramic bridge embody the designer’s tiered schematic and project the theater’s signature image. Paolo Soleri with his apprentices and IAIA students cast the shell and balcony using the “silt pile” earth-forming techniques developed at his non-profit educational Cosanti Foundation in Scottsdale, Arizona. The shell adapts the cast concrete quarterspherical “apse” Soleri built for Cosanti’s open air studios to the IAIA specification that the theater evoke “a cave or partially underground room”. The shell’s rusticated concave surfaces, pebbled aggregate to about head height and heavily faceted concrete above express geology and diffuse voices and music outwards towards the audience. The theater receives praise for its acoustics. The shell wall is studded with grommets for attaching stage properties. Behind the shell the long gentle slope of an earthwork, an arabesque in plan, built from the bowl’s excavate spoils, rises westward. The theater’s service spaces occupy the distance between the shell and the hill.

Centered on the shell and looming through it to break the curve of its edge, the balcony of the upper stage stands on two grooved hollow columns wide enough for a person to climb through. Openings into the columns from the stage turn away from the audience’s view allowing actors to enter and ascend unseen to the upper stage. Bracketing the columns, wide stairways with broad landings switchback up to penetrate the shell through irregular openings to the upper stage; two grouped pairs of vertical passages, two obscured, two visible. 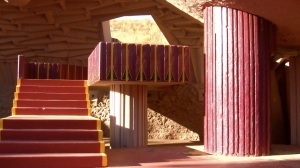 The upper stage area extends to the roof of both the shell and the service rooms behind it. Running the face of the shell, a bridge integrated with its construction crosses the balcony providing a panoramic performance groove. Footholds stage left and steps stage right permit players full lateral movement across the upper stage. Indeed, the entire roof of the shell and service rooms behind it may be used either for drama or as a staging area. Holes in both horns of the scooping balcony may serve prop rigging or lighting. A pair of openings dropping like eyelids through the shell on either side of the stairways could be used similarly or even performed through.

The canyon ramping down stage left

Stage left a ramped canyon slopes down to the main stage from a point to the northeast where the wedge of the artificial hill descends to grade. From the rim of the canyon’s reticulated battered walls, three rainwater collectors project their spouts over the ramp. Originally electric pumps would switch on to shoot water from the basins into the canyon. From the upper stage a bridge crosses the canyon stage right rises a hoodoolike decked tower accessed from the stage via an interior stairway. The platform connects to grade via a walkway.

Four concrete towers for lighting and sound equipment stand at the upper rim of the seating. A control bunker centers in the promenade, focused on the stage.

The theater bowl’s architectural space flows as vertical, horizontal and deep space. A vertical flow runs upward from the two vomitoria below the seating upstage to ascend the stairways or through the pair of hollow columns to the upper stage. The vertical movement can be said to split, stage right up the fire tower and stage left up the canyon and earthwork behind the theater. Again, there are horizontal flows on three levels. The first crosses the main stage, left from the canyon mouth across the shell’s enclosure to the fire tower stage right. This horizontal flow connects two of the verticals. Then there is the flow across the upper stage bridge. Finally, action may flow across and down the background hill connecting to the canyon, thence diagonally to enter the stage. The audience may flow around the promenade at grade and through the bowl via its five aisles offering an infinite variety of lines of sight and viewing positions.

Vomitorium opening alongside firepit from beneath seating

Being there is worth all these words. Perceiving these forms and lines of energy one immediately realizes that the amphitheater is a radical departure from conventional western theaters. In the west, all but the rarest theaters-in-the-round rely on the Renaissance type of the proscenium as picture plane through which one watches the drama take place in a box. One thinks of Palladio’s Teatro Olimpico in Vicenza, Italy which even incorporates trompe-l’eoil perspective in its stage design. The outdoor theater bowl at the Santa Fe Indian School is a multi-dimensional armature for performance, inviting the players to physical engagement with its parts. The drama may play out in a bowl but embedding the bowl in the earth and opening the audience’s view to the mountains beyond establish a connection between locale and the world beyond.

This description purposely limits itself to the theater’s physical aspect. To understand its underlying design principles please visit the Design and Construction section of this blog (under construction).